As communities continue to evolve, many organizations and cities are focused on identifying ways to support the movements of sustainability and alternative transportation. Currently, one of the most popular forms of alternative transportation is bicycling. Without a doubt, most everyone knows the benefits of cycling include a healthier lifestyle, fewer emissions, and lower stress levels, due to less time spent in traffic. As residents and tourists increase their bike use to enjoy such health and environmental benefits, the riders’ needs and wants start to escalate. 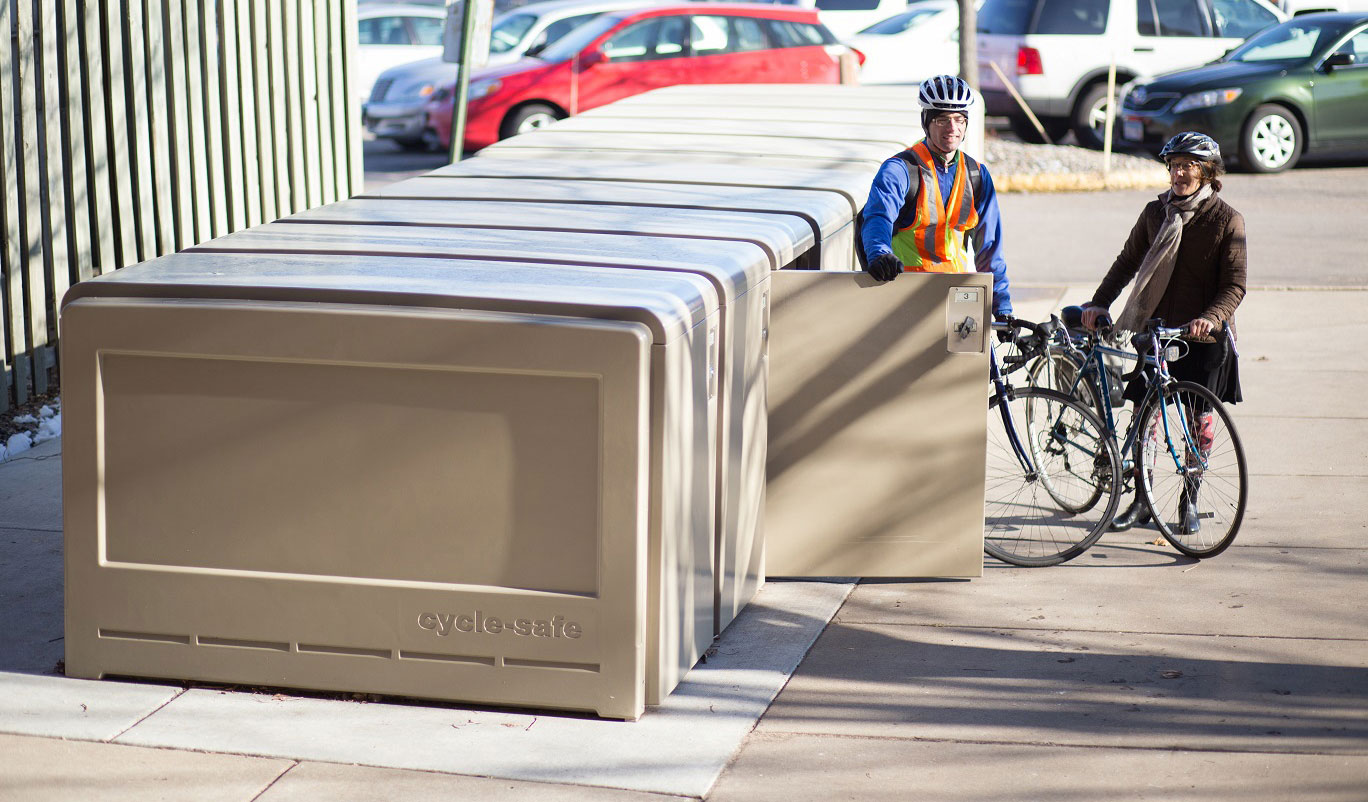 To this means of alternative transportation, secure bike parking is essential to sustain a community cycling initiative. Supporting cyclists with dependable and secure parking, like CycleSafe bike lockers, is often the responsibility of property owners and governmental entities.

When considering the options for creating bicycle parking, planners are not only met with a great deal of options, but also budget concerns. The Minnesota Pollution Control Agency (MPCA), located in the Lafayette Park Complex, just outside of downtown St. Paul, Minnesota and near the state’s Capitol, spent five years bringing its own bicycle parking project to fruition.

In 2010, the MPCA began receiving complaints from staff about wooden bike lockers at the Lafayette Park Complex that had deteriorated and needed to be replaced. At that time 10 CycleSafe bicycle lockers were selected for durability and dependability as displayed throughout the Minneapolis – St. Paul area.

LPTC began its research and comparison of varying bike parking facilities, which focused on quality, maintenance, footprint, and life cycle. However, cost was the key component of the research, as fiscal responsibility was of importance.

In early 2013, the LPCT researched bike cages, open-air cage structures with individual parking stations inside. While secured by a locking mechanism, these cages do not provide protection from the elements and still allow an open view to what bikes and gear are being stored in the cage, which became a concern. “Out-of-sight bikes seem to be less targeted,” said Harold Weigner, a former MPCA employee that was involved in the project.

More importantly, the cost of the cages was beyond what the budget would allow.

In fall 2013, after polling cyclists about what they prefer for adequate bicycle parking, the LPCT contacted CycleSafe regarding its high-quality bike lockers. Secured with a high security Abloy lock cylinder with non-duplicable keys, these units provide full protection from the outdoors, including extreme temperatures. “Bikes are designed for outdoor use, but they live longer if optimally protected from water, dust, and ultraviolet light,” noted Weigner.

The LPCT selected 20 CycleSafe’s bike lockers, not only for the quality of the product, but because of the price at which such a quality product was available. “The bike lockers provide a greater price per bike value when compared to bike cages, especially when you consider the life cycle cost,” said Melissa Wenzel, Minnesota Pollution Control Agency, LPCT member, former chair.

With approval received, the funding for the lockers was provided and supported by the Minnesota Pollution Control Agency, Department of Natural Resources, and the Board of Water and Soil Resources.

After five years of researching, planning, securing funding, and implementation, the LPCT has implemented a 50% increase in its bike lockers with CycleSafe.

The bike locker installation has since alleviated availability issues previously plaguing staff members. “We had had a waiting list to use our bike lockers for as long as I can remember,” said Wenzel. With the increased amount of lockers available, the wait list has since dissipated. Additionally, those biking to work are now more comfortable doing so year-round, because the bikes are completely shielded from the elements.

The Minnesota Pollution Control Agency and the entire LPCT are hopeful the increased bicycle use and locker availability will encourage more individuals to consider biking to work. That amplified use would create the potential for an expansion of bicycle parking availability, plus it would continue to increase the health of cyclists and decrease the amount of pollution created by motorized vehicles.

Being focused on the environment and air quality, the Minnesota Pollution Control Agency has been recognized for its efforts over the years, including receiving a Commuter Choice Award in 2010. The “Public Agency Leadership” award acknowledged the agency’s internal changes to assist employees in reducing their carbon footprint at work.